If you travel to Olympia National Park, you must stop in at Lake Crescent Lodge. 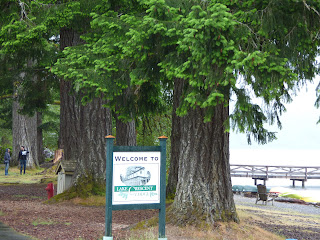 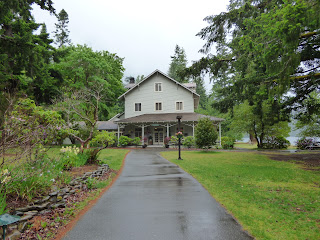 The lodge isn't huge, but oh so quaint. A great place to come in out of the rain. I don't know where I'd rather stay. The lodge, or these cute little cottages nestled beside it.
Notice the rocking chairs!  Cute! 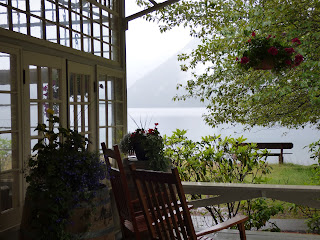 View from the front porch of the lodge. 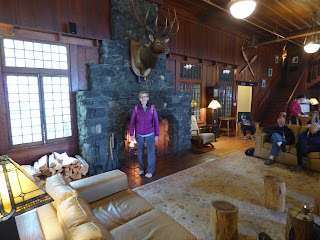 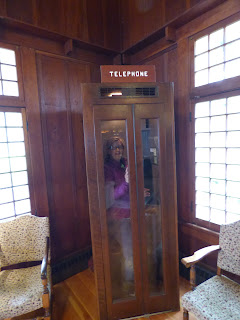 So, this is the most notable piece in the lodge. For you young ones, this is a telephone booth! People actually stepped into a booth and dialed a phone from it!

This is the Robert Kennedy Phone Booth. (If you don't know who Robert Kennedy is, take the time to wikipedia him! Hint: he is related to JFK! I hope you know who he was!  Wink wink. )

So, legend has it Robert happened to be staying here at the Lake Crescent Lodge when he got the news Marilyn Monroe died.   He then spent  much of the afternoon in this phone booth. No cell phones during that age! Too bad for the other patrons who wanted or needed to use the phone!

The lights and fan still work in the booth. So does the phone! What would you need a fan for? Well, turns out people smoked in those booths! Imagine closing the door and inhaling those fumes! ( Cough cough! )

The gentleman at the front desk told me the phone still works and people call the number in the booth at least once a day. However, they don't realize they are calling a phone booth! I wasn't sure I believed that until... 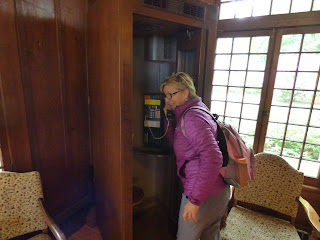 Sure enough...the phone rang! The gentleman laughed when he saw my reaction! "Go ahead, answer it!"
So I did!
The man on the other end was calling for a chef in the kitchen! I was so excited to answer the phone, I babbled on and on to the poor guy on the other end that he was calling the Robert Kennedy phone booth!

"No, really. You are calling a phone booth in the lodge!" I giggled.

The front desk gave me the number for the kitchen which I then relayed to the caller and replied, "Nice talking to you!"

I think he thought I was nuts and was glad to hang up!

The Robert Kennedy phone booth. Another reason to check out the Park.