I've just returned from holiday in California. The week was packed with family, adventures, and places of interest.
I'll fill you in. But first, call me a ding-dong. Seriously. I had absolutely no idea how crazy driving on California highways could be.
There were times it took us thirty minutes to go three miles. 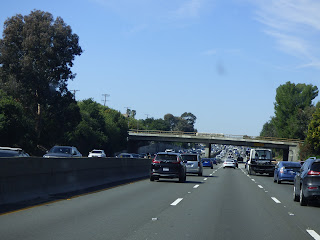 If you live in California, you already know this. I salute you. Truly. I'm standing at my desk toasting you with my tea. To say the least, I'm impressed.
How do you do it?

Our first moments in California were less than dull. You know that saying about not being in Kansas anymore? Yeah, that.

Hubby and I dragged our weary butts off the plane at LAX.
We sprinted to an overcrowded bus which took us to an overflow lot, where we then shoved our luggage in a van filled with a family of five who snacked on a bag of Cheetos. Licking their cheese covered fingers, they turned to us and asked, "Want some?"

Were they for real? I turned my head away as I tried not to gag. First off, I hate Cheetos. Second, well, do I even have to explain? Gross!

The van driver swerved between traffic lanes driving faster than I have in my entire life. I closed my eyes. I'm not even Catholic, but made the sign of the cross and hung on to hubby's arm for dear life.
Somehow, we arrived at the car rental.

After waiting an hour, we signed our life away to a guy we'd only met through a computer screen (not kidding.) He managed to convince us we had less than stellar driving capabilities in LA LA land and would need more insurance, "just in case."

An attendant wearing a facial mask then handed us our keys.

We looked at each other and said, "We should have Ubered."