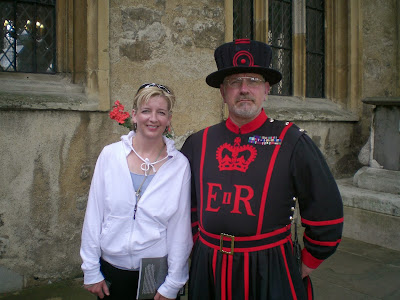 Having just eaten my share of turkey, I thought it appropriate to talk of beefeaters!
The real name for this gentleman is Yeoman Warder.  This is not just a costume, but actually is a pretty big deal over there across the pond.  It is an honor to be a Yeoman Warder.

A few facts about a Yeoman Warder:         One must be passionate about history.  After all, one of their "jobs" is to guard the Tower of London.  It is old.  Really old.  Like 1100s old.  That's old.
Next, they must love the public.  It can't be easy to love us.  Especially when we ask questions such as "Are the jewels real?" or "Did people really die here?"  Yep, they did.  Including Queen Anne,  but that is for another post.
In theory,  they are to guard the Tower and also be sure that the jewels are safe.  Practically, they are tour guides who know the story of the Tower of London like the back of their hand.  They are quite funny and really tell great tales.
Each must have served at least 22 years in the Armed Forces of Common Wealth Realms and also hold the Long Service and Good Conduct Medal.   I learned so much during the hour tour.  There are ravens at the Tower of London.  Seven.  (Six and also a spare!)  The story goes that if they go awol, the Kingdom and the Tower will crumble.  Hmmmmmm..... Their wings are clipped just to be sure!  The Yeoman Warder also has a red dress uniform that they wear for special occasions.  It costs around 6000 pounds (that is about $9800 US dollars!) each.  Most days, the above picture of their blue "undress" uniform is what they wear!
Why are they called "beefeaters?"  The most likely explanation is that they were paid back in the day,  partly in salary with beef.  I think it is all in who you ask!   Maybe they just like beef?

Good question...Do any of you know the answer to why they are called beefeaters?