There has been much media attention drawn to the 20th anniversary of the death of Princess Diana. I believe I've watched every program and bought every magazine and book written about her life.

My attention has been drawn back to that royal wedding of the century on 29 July, 1981. The Archbishop himself was quoted, "Here is the stuff of which fairy tales are made."

Well, this week we're creating our own fairy tale wedding with the nuptials of my daughter just days away.

No, there won't be 2500 invited guests. (Whew!) And its highly unlikely 750 million will tune in on TV! But, oh what a glorious day awaits. 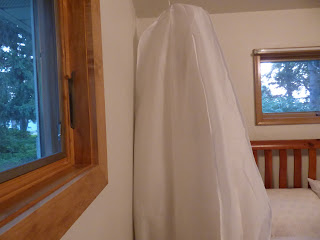 Inside this white covering is my daughter's wedding dress.

Guaranteed, there is not 40 yards of ivory silk taffeta. Nor is there 100 yards of tulle or 10,000 individually applied pearls and sequins. It took a seamstress three months to hand sew those 10,000 pieces to the world famous dress. GULP!

Did you know there was also a back up version made,  just in case?   WOW! 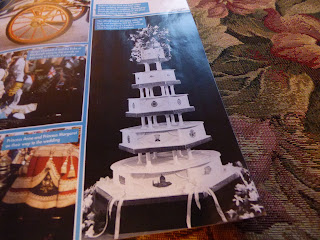 And then there was the cake.
A five-tier, 168 pound wedding cake covered in marzipan. I read there was a second cake made also. I suppose that would have been disastrous if somehow it was dropped. Yikes!

I have to say that our cake is going to be much more grand. I can't wait to see it. Our dear friend Yvonne is making it. It will be stunning. And the cake inside...well, lets just say I'm saving ALL my calories for at least a couple pieces that day. Yes. Every single bite will be worth it.

Our week of joy begins.