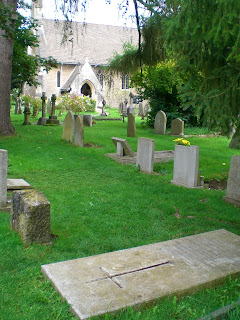 Tomorrow (Nov. 22) marks the 50th anniversary in the deaths of CS Lewis and President John F Kennedy.  Both referred to as "Jack."
The first picture is of CS Lewis' gravesite.  (The one with the cross.)  The bottom, JFK.
Each site very unlike the other...much like their lives.  Not much can be compared, except that they died on the same day.   CS Lewis quietly slipped away, JFK...audible.

These two had already lived and left their legacy before I was even born.
I have read many of CS Lewis' writings and was admittedly, very overwhelmed when I made the  pilgrimage to his gravesite.   A sign outside the churchyard  simply stating CS LEWIS GRAVE with an arrow pointing me in the direction, was my only clue  where to find it.  No eternal flame making it obvious.  Just a simple grave in the Holy Trinity churchyard.   With no one else around in the whole cemetery, I could take all the time I wanted to ponder who this man was.  It was quite meaningful for me.  So very peaceful.  I wish I could have met him in life.  I think we could have had great conversations about Aslan around a cup of tea.

I have also been to the JFK gravesite.  I mean no disrespect whatsoever.  After all, JFK was our president.  But with so many people gathered  around the site, the clicking of cameras, and the expressions of grief, it was difficult to just reflect and be silent.  With this 50 year anniversary, it just begs the question...What will my legacy be?  How will people remember me?  How do I want them to remember me?  I wonder if these two men ever thought just how much people 50 years after their deaths still thought about them?  What if JFK wasn't assassinated?  Would he have lived to be 90?  And what would life have been like for CS Lewis if Joy had not died 4 years after they married?  I am thankful that CS Lewis did what he was called to do...write.  He wrote for future generations to learn and imagine and to think. 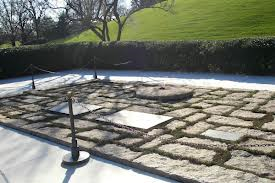