Red white and blue.
The colors are much more noticeable being July 4 is next week.

I found this little book in the grocery store of all places.

The title hooked  me. 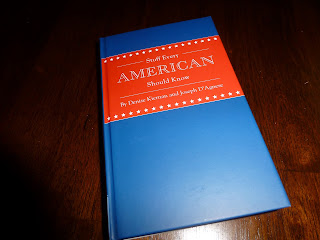 I picked it up, and sure enough, this is stuff  Americans should know.
Like what you ask?

Well, did you know that it's illegal to rip a dollar bill in half?  Not that I would do that, but still, it's illegal!

Or, how  about this one.
"The seven spikes on the crown of the Statue of Liberty represent the seas and continents of the world." I did not know that!  Also didn't  know that in the Statue's left hand, there is a tablet with the date July 4, 1776.  I mean, I knew there was a tablet!  Just didn't know the date was on it!  It is written in Roman numerals.  That would look like this.  July IV, MDCCLXXVI.  Wow right!

What does bicameral mean?  Well, it means "two houses" as in the Senate and the House of Representatives.  Hmmmmm....

Want to run for president?  You can if you qualify for the job!  Rules are rules.  First, you have to be at least 35 years old.  You MUST  have lived in the USA for at least 14 years, and you MUST be a natural born citizen.   I can check all three!  Maybe I should run?!

It's not easy to become an official citizen of the USA.  One of the things you must do is answer questions.  There are 100 of them.  Which ones do you need to know?  All of them, because you will be randomly asked 10.  You need to get 6 right to pass!
Here are a few...

"Who was president during WWI?"

"How many amendments does the Constitution have?"

"Name one of your state's US Senators."

Are you looking these up on google?!

What a great read.  Indeed, good stuff to know.

This I already knew by heart...

I pledge allegiance to the flag of the United States of America,
and to the republic for which it stands, one nation under God,
indivisible, with liberty and justice for all.