This weekend I purposely unplugged.  I liked it a lot.
No cell phone, no social media, no computer, no nothing.  I didn't even get in my car.

I did manage to hop on my bicycle and watch the clouds roll by. 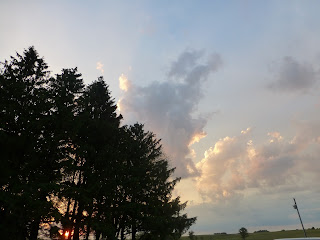 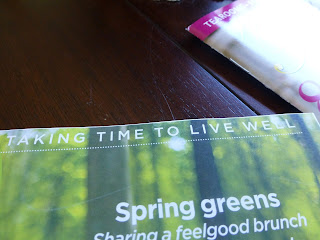 I spent lots of time reading.  I have discovered this really great magazine.  It is called The Simple Things.  A United Kingdom magazine actually.  My splurge every month is to go into the book store and buy it.  I could get a subscription, but I would much rather "have" to go in and get it!
Don't you love the words on the front cover?  TAKING TIME TO LIVE WELL.

Yep.  I did exactly that this weekend. 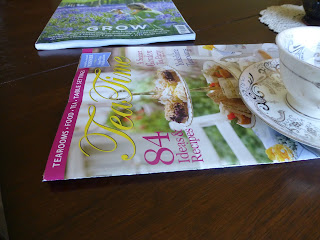 There was tea, and catching up on magazines and books. 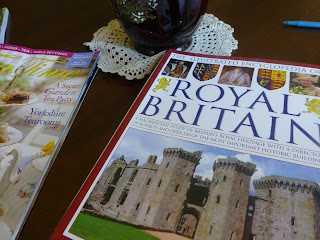 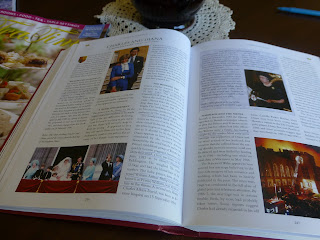 I am learning much about those royals.  This book is 512 pages of history of England.  For instance, Edward VII reign was a brief 9 years, compared to his mother, Queen Victoria, who reigned for 63 years.
George V didn't expect  to be king.  His brother Albert died from pneumonia,  making George the next in line.  He married his late brother's fiance, Princess Mary of Teck.   He reigned from 1910-1936.

Then, there was the abdication.  Lots written about that.  Crisis for sure.

Along came George VI.  This king came fast and unexpected.  He "set out to restore the good name and dignity of the royal family, which he felt had been blemished by the abdication crisis."
We know this king because he was the present Queen's father.
A movie was made about him.  Perhaps you have seen The King's Speech.

From Arthur, King of Camelot to present day royalty, it all fascinates me.  This book will fill in the details of chapels and castles and also Norton Conyers.  The house that inspired Jane Eyre.  Can't wait to read that!

I'm thinking this weekend will be a repeat in the near future.

Some unexpected great things happened too.  For instance, there was a visit from our great friends John and Yvonne,  and our daughter showed up and spent the night with us.

I couldn't agree more with the magazine...It's THE SIMPLE THINGS in life.

Have you unplugged lately?