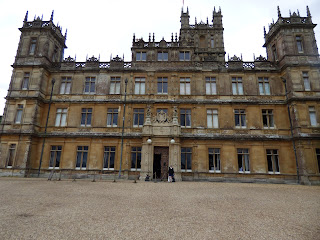 Pinch me. I'm here.
Everything about Downton Abbey came alive when I stepped out of our van and on to the property. In many ways, I felt like I was stepping on to a set. It just was all so surreal.
Julianne Fellowes is an amazing writer. Downton Abbey is character driven and he did that so well when he created Bates and Anna, the Crawley family and all the others. Each character came alive for all of us. Remember the craze of the show? People dropped their plans to watch what would happen next.
Now that, my friends,  is creative writing at its best. Julianne hooked us from the get go. 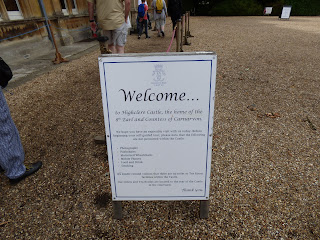 Such a bummer that we couldn't take photos inside. I get it. But still. SIGH. 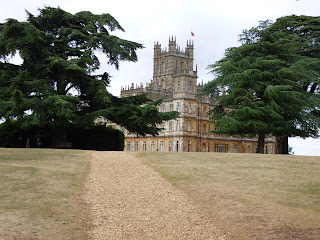 Looks exactly like the opening scene doesn't it?! I tried to get this photo just right! 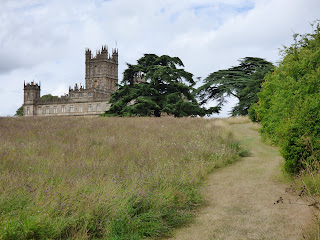 We walked much of the estate. Wherever you ambled, you could always see the castle. 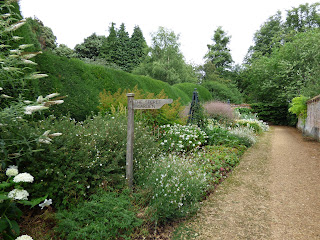 Why, of course, there are gardens. Secret ones. Lovely place to collect your thoughts. 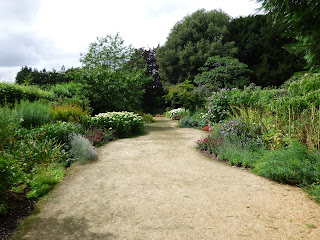 It was rather warm while we were in England and things were pretty brown, but as you can see, there were spots of beautiful color. 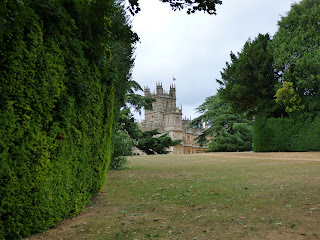 In the series, Downton was used as a hospital for those soldiers in the war.
In real life, Highclere was used in the same way. I'm sure the history of this castle played a part in the episodes where the hurt were brought to heal.
Almina Wombwell was a real person who was instrumental in carrying out this cause.
She was adored by the patients. She was revered for her help in little touches, giving whisky before supper, and helping to contact the patients' next of kin.

One such patient praised her:

"... Highclere hospital-it is quite the best I have seen and its little Lady is a marvel, another Florence Nightingale..."

I love history. It's such a treat to be able to visit such esteemed estates in England. If you get the chance, GO! What a lovely way to spend your day.