On a continual basis we in the dental field hear, "I hate going to the dentist."
Without exception, the next line is "have you seen the movie Marathon Man?"

The life of a dentist is not easy.
A scene from Finding Nemo states, "the human mouth is a disgusting place!"
The movie Castaway...two words...ICE SKATE.  You get the picture.

We realize it is hard being a patient.  Women tell us all the time that they "would rather give birth than go to the dentist."  Now that is quite a metaphor.

Tom was asked at his recent retirement party "why did you become a dentist?"
He explained the blessings of flexibility and the responsibilities of having your own practice.  We laughed as he said, "you try working with 12 women on a day to day basis.  Believe me it is not easy.  That is a lot of estrogen!  I never knew from room to room if I was walking into a freezer or an oven.!!"
We have fans and electric heaters going continually.  Really!
He finally had to put a lock on the thermostat.  True story.

I was most impressed by his narration of what he can do because of his abilities.  His gift of dentistry has brought relief to children around the globe in orphanages.  Children terrified by their tooth pain, and by his gentle spirit, solace and hugs ensue because of his care.  It is not about how much money he can make.  It never has been.
"To whom much is given, much is expected."
Tom has been given much.  He is a husband, father, grandfather "papa", boss, friend, brother, son, colleague,  served our country early on in his career with the Air Force.  He is a man of great wisdom and integrity and is full of character.  He has given  us a great example of how to give back.  So full of humility.  Humble.  That is him.
I will miss our bantering.  We laughed a lot.  He is off to his next chapter.  More dental volunteering.  He works on a mobile unit now.  We all hope to join him from time to time.
Happy retirement Tom.
Posted by Tea Time at 9:08 AM No comments:

The dash.  That space in between.

What impressed me the most about this internationally acclaimed author was his perseverance.

He wanted to be an author and he went after that dream.  He was rejected over 60 times.  I don't want to be rejected once, let alone 60!  I read that he kept every one of those rejection letters.  Me...I would probably burn them..one at a time!
He stayed the course.  He just kept dreaming the dream and one day it happened.
He wrote 14 books and was working on number 15 while he was sick.  Political thrillers.  Intense, page turning drama.  He was a gifted writer.

Humble.  That was him too.  He was read by presidents and kings, and yet by many accounts, he was just that...humble.  He loved his wife.  I read that he flashed his ring at book signings a lot!  Handsome indeed.
He loved his children and he loved his faith.
His motto was "keep the faith."
He was a great friend.  And he was young.  He obviously fulfilled his purpose.  What a legacy.

Lived out his faith.
A man who loved his wife.
Loved his children.
Great son
Great brother
Humble
Author
No regrets

Goldilocks meandered her way through the woods, and found a cottage that was just too tempting to pass by.  She unlatched the front  door and peered inside.  Seeing that noone was home, she stepped forward and pushed the door shut behind her.
Inhaling food, she realized just how ravenous she was and headed for the table.  Sampling each bowl, she settled for the one that was "just right."
With a full tummy, it was time to just sit.  She again tried each seat, and found the one that was "just right."
Rocking back and forth, she was content...up until she rocked too much, and broke the chair!
Tired, she made her way up the stairs to the bedroom.  There she found 3 beds to try out.  The first being too high, the 2nd, too soft, and the 3rd...yep..."just right."
The 3 bears came home from their walk only to find their cottage broke into.  Food had been eaten, chairs had been broken, and beds had been disheveled.
Goldilocks awoke, and jumped out the window, vowing to never go into those woods again!

The "my son is in Alaska, and his lodge got broken into" version!

Having just experienced Mt. McKinley in all its glory from the air, life is looking like it is going to be pretty sweet for the next 3 months.  The woods are vast and he can see for miles and miles from the plane.  The sights are awe-inspiring.  THe plane lands smoothly on the airfield..(this mother is thankful.)  All seems well.  The propellor stops, and the unloading begins.
ENTER REALITY.

This time it is the bears meandering through the woods, finding a lodge that was just too tempting to pass by!
Clawing and bearing down the doors (sorry...had to put that pun in!) they are in!
Goldilocks broke the chair.  The boys all hoped it was just a chair!  Nope...the bears had a picnic in the lodge!
Broke lots of things, ate lots of food, and left lots of  samples to show just how much food they ate!  To say the least, it was a mess!
Unlike Goldilocks, they were not there when they got there, but decided to show up that night just to say hello!
One got up on his hind legs and showed off his height...at least 7 feet!

This was not the way I envisioned the start of Mark's summer to go.  Already seeing 5 bears within hours of getting to the lodge is not what a mother likes to hear!
We got this unexpected, but wonderful, phone call from him.  He was using the satellite phone from the lodge to call on Father's Day.  I was so excited when I heard his voice.  Then he told us this tale.
He seemed to be more bothered by the mosquitoes then the bears!
The adventures begin.
From this end of things, it will be a long summer! 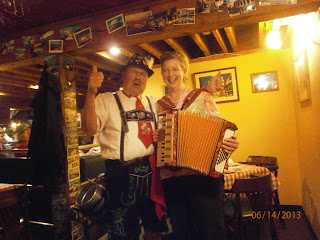 Speaking another language expands your outlook on the world around you.
Last night we immersed ourselves in the folklore of Germany.
Vacating the continent by plane wasn't necessary.  We simply transported ourselves by car to the Winzer Stube German restaurant in Hudson, WI.
There we engrossed ourselves in all things German.

Our eyes  adjusted quickly as we strolled into the dimly lit stube.  Just the right amount of light for the ambiance of this spot.
Our senses were awakened with the smells of German fare wafting past our noses, and the sounds of merriment being heard throughout the establishment.  A sociable hostess greeted us, and escorted us to our table nestled in the back corner, where we were in full view of all that this night had to offer.  Our friends soon joined us.  The table was covered in a red checked tablecloth with a lamp that gave us just the amount of light we needed to peruse the menu.
Soon our waitress introduced herself in German, which was an invitation for our friend to launch into a lively dialect between the two of them conversing in a language that only they knew.  It was captivating to sit there and listen, but not be a part of, this obvious delightful communication between two people who immediately bonded because of a shared knowledge in a language.
Drinks were first.  I stuck with my no risk choice...tea!  I am so english!
The rest drank in the spirits of Germany.  I sipped each of their picks.  The beers...too dark, but the wine was adequate.
After much contemplation, we settled on our selection of cuisine for the evening.  Most meals consisted of red and white cabbage and spatzle.  Mine was called Rinder Rouladen "mutters Rezept"
Translation:  beef roll ups with mustard, pickle, bacon and onions.
It was quite tasty.
Throughout the evening we kept hearing an accordion.  The sound was jovial and added to the mirth of the evening.  Soon the maker of this joyful noise made his way to our table and serenaded us with his rendition of "roll out the barrel."  Clapping and hilarity ensued.  He was dressed in suspenders, knickers, and a distinct green hat.  His face brightly clarified his delight in sharing his gift of musical talent with strangers young and old, ready to sing along to familiar tunes from days gone by.
The evening flew by.  Oh the enjoyment of the senses we had this night.  Dessert was an apple struedel that was out of this world.
Germany.  A visit that must be on our bucket list.  Maybe Oktoberfest?  Kringle Mart?  Oh the possibilities.