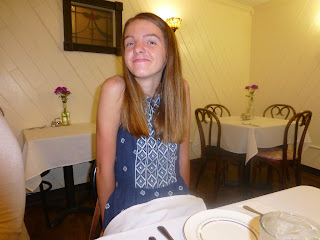 Saturday, she turned 15. What better way to celebrate than to take her to tea! 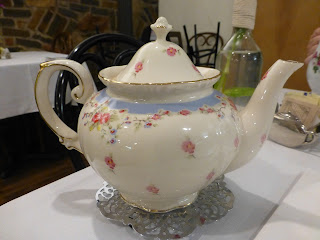 My sister tagged along,  too. We had a lovely time sipping chocolate raspberry, caramel pear, and chocolate safari teas. 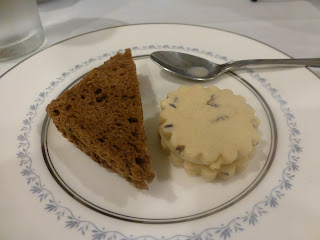 I especially loved the lavender shortbread cookies! I ate two! Oink oink! Linen tablecloths and napkins made Claire feel special. Everything was "fancy."

Claire is really good about putting her phone away while I am with her. We discussed school, her friends, and what she was doing later in the day to celebrate. She also told me I should open my own tea shop! My sister and I pondered the idea. It's still brewing! That would be a fun venture. Definitely a nice dream. Perhaps one day! 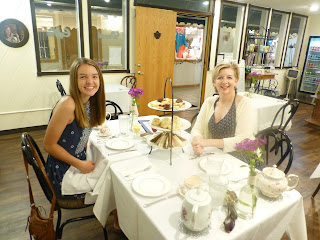 Such great memories that will bond us for life.  I wonder if my sister realized she got in the photo too...See that mirror in the upper left corner?  Yep--that's her taking our picture!


NOTE: I am taking a certain trip across a certain pond in just a few days!  As you can imagine, I'm thrilled!   Each day will be filled with wonder.   I have my journal  ready to write about new adventures. 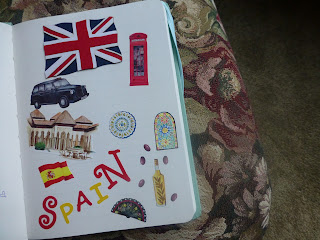 In order for me to be in the moment, I will be taking a break from my blog.   I don't want to miss a thing.   I managed to look around me this past week and low and behold, I got a rainbow and a sign that spelled P E A C E. Amazing the things that catch your eye when you are really awake.

With that in mind, I look forward to all that lies ahead. Travel does that. Takes us out of our comfort zone and lands us in the middle of places and dreams we could never imagine.
I am traveling with my best friend (hubby) and also some very dear friends. They are really good at helping me see life through a different lens. I am in great hands.

I know I will learn so much and can't wait to show you when I return. I will be taking thousands of pictures (lucky you!) and hopefully will tell you lots of stories starting back here on July 11.

I've been privileged to hike to the bottom of the Grand Canyon.  Yes I did. Whoo hoo. I hear your oohs and aahs. And yes, it was hard. Really hard. I still can't believe I actually made it ALL THE WAY down and back up.  A huge feat. One of the hardest things I have ever done. It's a mental game.  If you ever try,  be prepared. Did you listen when I said it was hard? It's worth repeating. You could die trying. Literally. You must train and read all you can about the trails. One slip and you could head over the edge. There are no guard rails. The Grand Canyon deserves respect. Do your research.

Yosemite is breathtaking. Hubby and son climbed Half Dome. My son is pretty athletic. Even he said the climb took every muscle he had. The cables about did him in. Again, respect the mountain.

We've bicycled the carriage roads in Acadia. Climbed the Beehive too. I have no upper body strength, and proved it on that trail. I did make it to the top. Barely!

Zion, Arches, Bryce Canyon. You must see them all. Some of the most breathtaking scenery in the world lies within the National Parks.

Last year, hubby and I went to Yellowstone.
We saw some pretty spectacular views. Here's a peek... 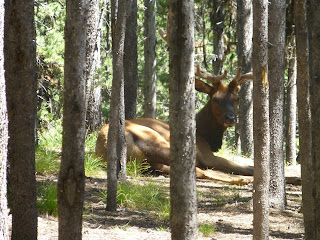 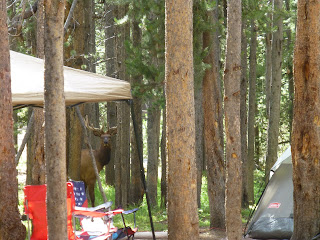 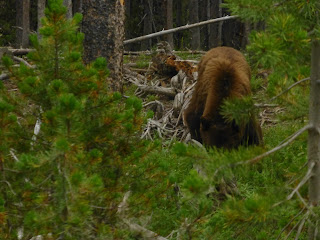 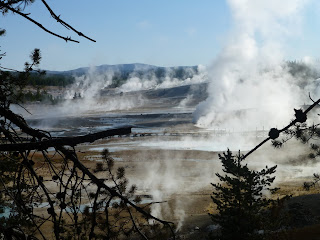 See those animals in the above photos?  Can you say W-I-L-D?  It may look like they are harmless and just want to play. Well, they'll play alright. They will toss you in the air like a rag doll. Don't EVER get close to one. They will show you who is boss. Trust me,  it's not you.

While at the park, I  witnessed some  foolish  people.  For starters, I heard a woman ask a ranger, "So, what time do you let the animals out in the morning?" I made eye contact with that ranger. I knew what he was thinking. I bet you can guess too.  He just shook his head and replied,  "Maam, this isn't a zoo. These are wild animals and they come and go as they please."
Yep. Foolish.

Just yesterday, Yellowstone was in the news.  See that photo above of the geysers? They look hot, don't they? What gave it away? Maybe the steam? There are signs EVERYWHERE along this boardwalk that warn you about the geysers. Words like : STAY ON THE TRAIL or  STAY AWAY-BOILING WATER....Get the picture? Most do. But not everyone.
That article I read about Yellowstone? Yeah--someone fell in one of the geysers.
I'm shaking my head. Do you see why I just don't understand?
You are not invincible.  You may think an animal is cute. Or, wonder just how hot that geyser can get. Think about what you are doing. Don't approach an animal and stay on the trails. The rules are there for our protection. Your life could literally be in danger.

Ever touch a hot stove? Hope not, but it  really is hot and it really will hurt you.  There  are deaths in the National Parks. Many deaths every single year. They sell books called Death in Grand Canyon and Death in Yellowstone. They fly off the shelves. I've seen it. Such fascination with those books.

PEOPLE. Enjoy  the parks. They are a treasure and my memory bank is overflowing with sweet memories. But, you must respect  mother nature. She will win every time.
Posted by Tea Time at 4:12 AM No comments:

Won't be long now. The flying experience is close at hand.
You've heard the phrase "packed in like sardines."

And, I'm sure the thought of having no leg room makes you wish you had the superpower to fly.
Oh, and the restrooms? Don't even get me started. "Rest" is not exactly the word I would use. I try really hard to hold it!

Ever got a  seatmate who chats the whole flight? Or worse, an annoying chap who uses your shoulder as a drool rag?

My personal favorite...watching those passengers who really believe their carry on will fit in the overhead!

Remember that crying kid in the gating area? The one you prayed wouldn't be sitting near you?  Yep. For the next hours, he's your entertainment.

The flight is all part of the journey! Sometimes I am more than thrilled I brought my Bose headphones!

Found some unique tidbits on my destination airport. Read on.
http://londontopia.net/travel/lhr-10-interesting-facts-figures-london-heathrow-airport/

I'm thinking I need a bottle of Chanel No. 5. Read to see how fast the stuff flies off the airport shelves! 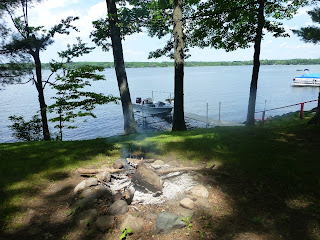 Can't you just smell that campfire burning?  I love fires. I got as close as I could get without burning the rubber on my shoes!
This day ranked among the greats.
I got to spend Memorial Day with one of my really good friends.

Meet Vickie.  She's the one in the green sunhat! 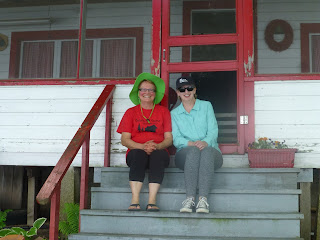 She's a hoot. We met each other a long time ago. At least 17 years now.  We met at "craft cult." Seriously. That's what our kids call it. Craft cult.  10 women who vary in craft expertise.  We have a fearless leader. Name is "Martha." Lets just say she outshines us all.

We try to get together once a month at this "cult."   Making crafts is always the goal. Some finished products are better than others, but we always manage to laugh and drink a bit of wine.

Anyway...that's where I met Vickie.  "Martha" came to us one meeting and said she has this gal she thinks would fit in nicely with our group. That's how it works. You have to get voted in!  She was right. Vickie is awesome!

Hubby and I drove  to Vickie and Craig's cottage for the day. A cute little place in the north woods. Best part? It's on a lake. 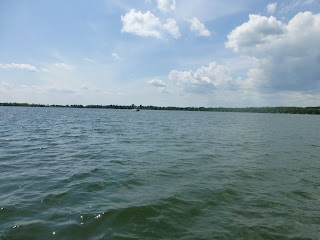 We went for a ride in their boat. Water sprayed our sun kissed faces just enough to let us know the lake was a bit too chilly yet to jump in.  Fish swam right along side us.  So did this creature... 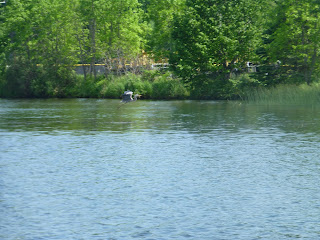 Good thing I didn't have any food in my hands. This determined heron would have plucked it right out of my fingers!
Thoughts of retiring in these parts tempted us as we floated past some pretty charming "cabins." One place had a huge big screen TV on the side of their garage. We considered dropping the anchor and settling in to watch, but it was just too nice  a day! 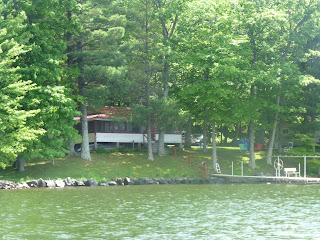 We made our way back to our little piece of heaven. Notice the adirondack chairs. And did you notice Vickie loves red?  Red roof, red screen door, red banister, red curtains, red planters.  So fun. The day was so relaxing. We ate, laughed, and talked about the latest movies and books we have read. We hated to leave. 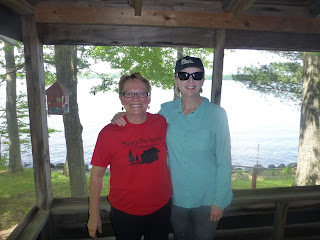 Vickie is a great cook, wonderful friend (even if there are times she tells me to "suck it up!") and is constantly filled with joy.  She is definitely one of the persons I turn to when I need a pick me up. She is my honest, trustworthy, so filled with wonder, beautiful friend.

I hope you have at least one such friend too.