One of my favorite sites in England...

It's true. I have many.
But, really. This is one not to miss. It's in Shropshire. Ironbridge. The first bridge in the world to be made of cast iron. It's a wonder to see.

On this holiday, I knew the bridge was under construction. I knew I likely wouldn't be able to see it, but I went into a bit of hyperventilation when I actually got there and saw this... 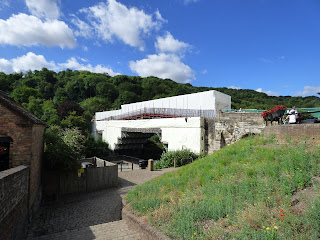 Eeeek. Major shock to my system! Nothing to see here, people. How disappointing for those who maybe didn't know it was under wraps and the shock it must have been for them. UGH. 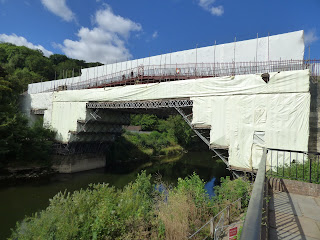 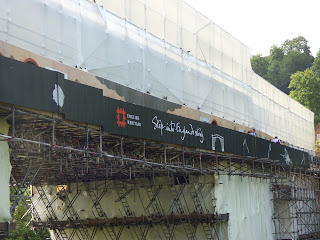 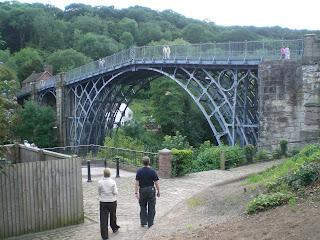 This is what it looked like when I saw it for the first time.  Breathtaking. 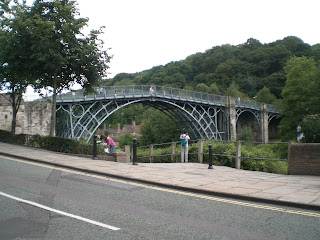 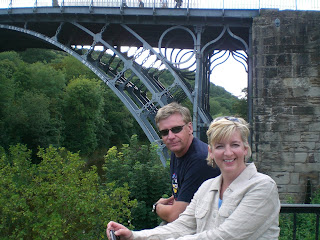 My dear friend John brought us here back in 2009. I'm so very grateful to him and his wife, Yvonne. We had the best holiday. We never would have found Shropshire and Iron Bridge on our own. Thank you just doesn't seem to be enough to say how very grateful I am.
The village is idyllic. Typical England fashion. 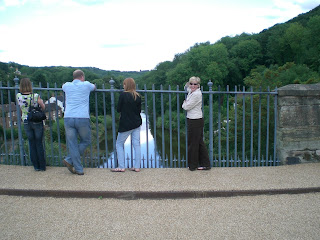 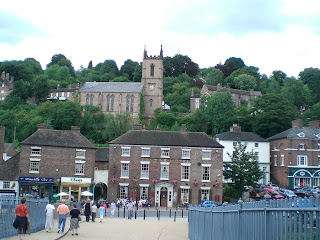 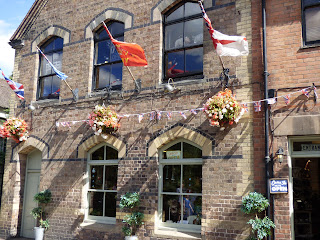 Back to reality and 2019. The bridge is now restored.  I've read the bridge is back to its original red-brown color.
I see a trip in my future.

I'm reminiscing this evening about Spain.
The blessings that are mine overwhelm me all the time as to my travels and the people I have met.

Because I met him... 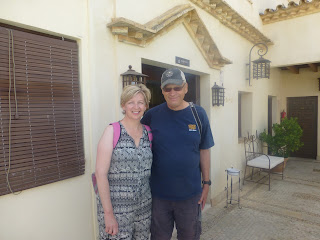 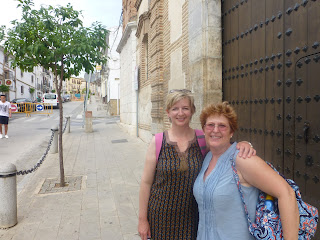 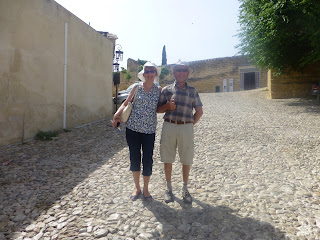 I got to meet them. 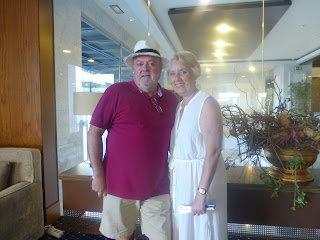 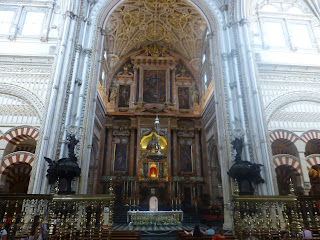 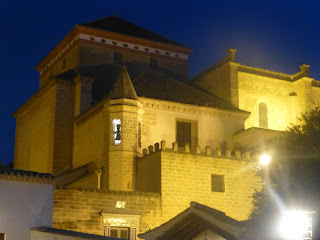 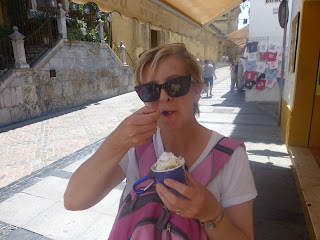 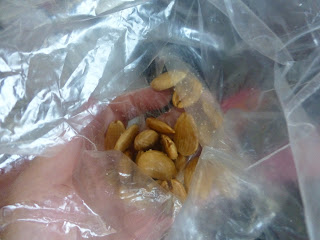 Life. It's about the people you meet along the way. I'm so very thankful these wonderful people are in my world. They keep me joyful. When I think of them it makes my heart sing.
I have them because I chose to take a step forward. Trust me people, it's worth it to not know where it all leads. That's the fun of it all.
I had no idea when I met John, and then Yvonne, that it would lead to England and meeting Alan and Marion. And how one thing led to another and we're on a plane to Spain to meet Paula and Antonio.

Serendipity is real.
I can't wait for what's around the bend.

Stay on your side

A friend is in England at this very moment.
Her first visit.
I'm laughing at her photos. In a good way!

She's taking pictures of everything. EVERYTHING! She's got it all on film.
Roses hugging stone buildings, sheep ambling across roads, the English countryside,  swans gliding along the river. It's all there.

I'm so happy for her.

She's on a tour, so she doesn't have to worry about driving on the wrong side of the road.  She's special. She has a driver.  I did too. But I bet  her conversations with hers are way more cordial than the ones I had with mine. 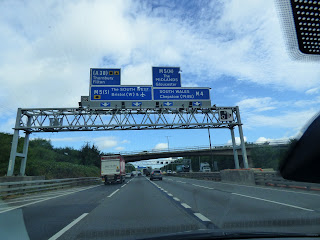 I remember all too well.  Like it was yesterday.

I was a legit passenger who helped my driver see the error of  his ways.

"Stay between the lines"
"Did you see you're on camera? Don't speed."
"You're getting pretty close to that truck, don't you think?"
"Focus."

That was my word. Focus. Drove the hubby nuts. Believe me, he was focused. At one point he had had enough. With sweat beading down his face he yelled, "If you think it's so easy, you drive!"

"Sheesh. You don't have to get so uptight about it," I replied. "I'm just trying to help."

Apparently my idea of help and his didn't mesh. 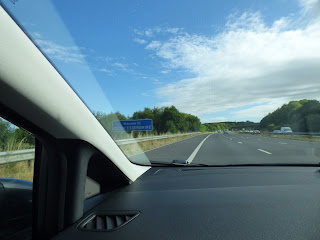 "Just be quiet. Not another word out of you!"

There are times when getting in the last word just isn't a good idea.  I was smart enough to realize this was that moment. 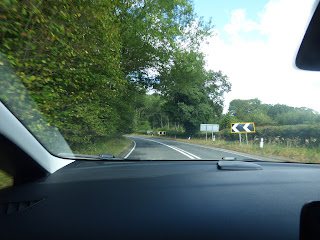 We got off on the nearest exit. I cringed, but managed to stay mute.  The Hail Mary's came fast and furious. The only sound heard between us was the snap of my camera. Truth be told, I'm positive that very sound aggravated him even more, but to his credit, he stayed silent.

After successfully maneuvering around this bend, I dared speak. "At least if we died, our last moments would have been on film."

Laughs ensued. Once again we were on speaking terms. 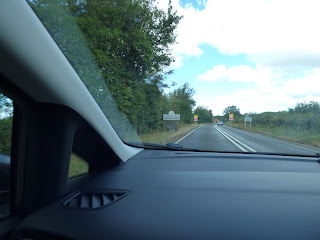 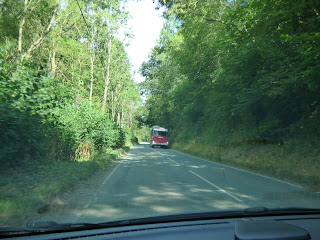 Random, but so interesting

Did you know back in the 1900's, people would send their children through the mail by parcel post? ME EITHER.
Check out this article.
So fascinating.

When people ask me where I live, I smile and respond, "The Cotswolds."
It's true. I do. And yep, I get some pretty strange looks. One even asked me, "You do realize you live in America, right?"
That was a fun conversation.

Anyway, I've been away. And it was idyllic. Fabulous. Amazing. Beyond wonderful. 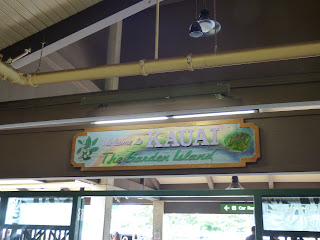 I've been in Kauai and Maui.
So much to share, but it's Monday. England blogs. And even though I was in Hawaii and had an amazing holiday, England was never far from my mind.

While on holiday, my one rule comes into play right away. NO CHAIN EATING. EVER.
I eat so much better while on holiday than I ever do in my every day life. I've vowed to change that. There are so many great eateries near where I live and I hardly ever frequent them.
Well, not anymore. New season. New rules. 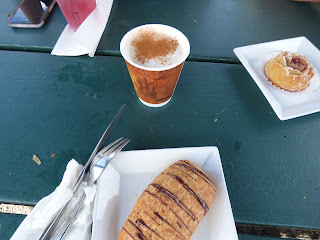 This is a quick photo while in Kauai. You're looking at THE BEST CHAI TEA I HAVE EVER HAD. EVER. And that's saying something because I love chai tea.
We found this little breakfast nook after a hair raising hike. (More on that later.)
Again...it's about the little things in life. Finding food and drink that is worth the calories! 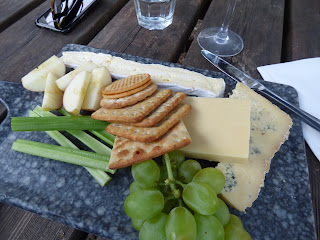 How simple. I had this for my dinner at a pub in England.
I now have this quite frequently here at home. 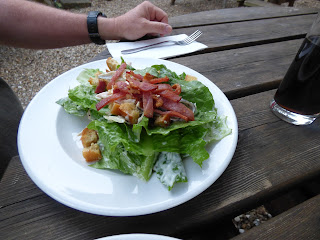 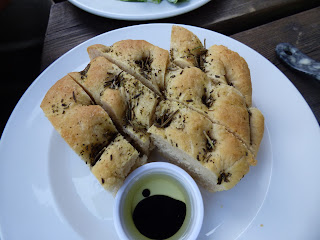 You get the idea. Fresh, organic food.
Posted by Tea Time at 10:17 AM No comments:

My mind has been in thoughts all day of those who gave their lives for us to live ours today.

Courage and strength. They all must have been so scared. I've been watching a few videos and it brings me to tears.

May we all live our best life because of their sacrifice.

I have an author friend who writes WWII novels.
Go over and check out her website.

www.sarahsundin.com.
She is an excellent writer and knows and does her research about WWII.