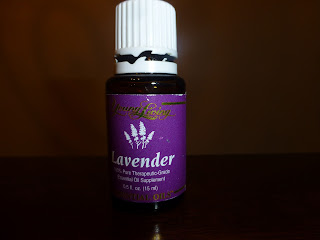 Lavender. It's one of my favorite essential oils.
When I smell the heavenly scent, I think of England.  There are many lavender fields across the pond.
You can walk down the many rows and even get a massage in the field! Doesn't that sound lovely?!
Below,  a few links to peruse.

Did you know there is a lavender field here in America? I sure didn't.

Hubby and I are taking a holiday to Seattle this summer. We've been researching what to do while visiting. We are taking a ferry to Victoria Island, among other places. We were following  the map, deciding which islands to stop in. Friday Harbor popped up.

The more I clicked, the more I liked. I squealed when the island revealed a lavender field!
http://www.pelindabalavender.com/

Will it or won't it? 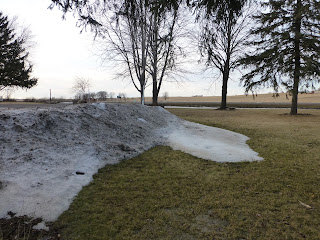 This is what my yard looks like right now. We've been experiencing warmer than usual temperatures here in the Midwest.  In less than 24 hours, the scenery will turn bleak. Supposedly.

That four letter word is spoken on all the weather channels, warning us to get ready! 'Dig out those snow shovels  'cuz we're not kidding--the white stuff is on the way!'  You'd think Armageddon is imminent!

Will we get SNOW, or not?

I think it'd be kind of fun to get dumped on. Bring on the 3 feet of snow. We can make snow forts and drink tea by the fireplace!

But on the other hand...it sure would be nice to be done with winter and move right in to Spring! Either way, there's not a whole lot any of us can do about it, except embrace it!


How true the above quote is. I received a letter meant only for me. One of a kind. The weighty envelope had hearts and sunshine drawn on the back and scrolled so eloquently was my name on the front. 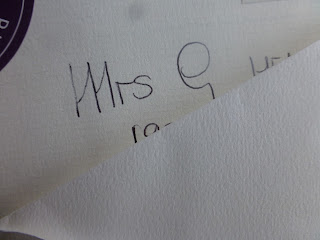 I held it close to my heart and whispered her name.  Paula.

I carefully opened the seal and pulled out the various "bits and bobs."  (don't you just love that! I can hear Paula talking.) The beauty of handwritten notes is hearing the sender speaking through words.

A charm spilled out.  Tucked between the pages of this cute little pamphlet on tea. 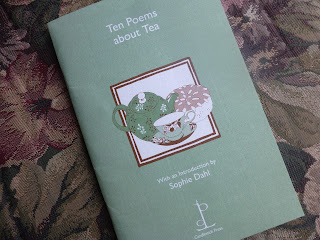 The quote inside reads "Tea is drunk to forget the din of the world."-Tien Yiheng

I can just picture Paula writing me this letter I'm smiling at, glancing over while writing this post.

"I'm writing this having breakfast in a local bar-it's a fabulous sunny but very windy day..."

She goes on to let me know she bought the above card in London! She saw it in a bookstore and thought of me. Isn't that lovely!  She thought of me while on holiday in England. I'm just so thrilled. Her writing is an art. A gift. This letter is one that I will cherish and read again and again. That's the beauty of a handwritten note. Paula took the time to write to me, think of me while enjoying a sunny morning in Spain!

Paula is a wife and mother to two adorable daughters. She is a dear friend that I have the privilege of knowing. Thanks to social media, she's a click away, but wow. I have her cards and letters which are priceless to me. I keep them in my journal and when I need a "Paula fix," all I have to do is pull them out and ponder what she might be doing at that particular moment.

I also love to click through all the photos taken while on holiday with her in Spain. Pictures are treasures as well.

Oh, and Paula...when we meet again, the chocolate chip scones will be on the menu-wink wink!!

Last evening I drove into the cities. To me, it's like driving into the abyss!
Detours, bumper to bumper traffic. It's enough to make me break out in hives. I craned my neck as I attempted to navigate the signs that directed me to West parking garage. I pulled in, found a spot, slipped the car into park and took a breath. Whew! I made it!

Honestly, I hate this place. I frequented this location every day those years ago now, while visiting my sister in ICU.

The site? A hospital. Regions, to be exact. One of the best in our area.
https://www.regionshospital.com/rh2/index.html

Sadness happens inside that sterile setting. Heartache. There is no greater sorrow than witnessing an entire family stepping out of an elevator, weeping. In all likelihood, that family just lost a loved one.

Their grief gave me pause.

Good stuff happens too. Really miraculous things. For one, the emergency team saved my sister's life.
But, back to last night. I received news my cousin was taken by ambulance to Regions. From where he lives, that would be about a four hour ride. I'm sure the paramedics drove fast. (wink wink!) Once again, Regions wins the day.  Healing needs to take place, but he will walk out of that hospital.

How quickly life turns. One moment you're driving down the road of life, staying in your own lane. Life is good.  The next minute, WHAM! Things drastically change.

Life is a gift, people. Live it. Gaze at that full moon a little longer. Savor that cupcake. Embrace your day. Splash in that puddle of water.

My cousin asked for a DQ blizzard treat. What a simple request to grant another. A mint m and m blizzard. Think about that. A blizzard.

As I left his room, I thought about every step I took down the hallways and into the elevator. Every single step.  I got to walk out of that hospital and continue on with my evening. Most of us got that privilege last night. And today? What if we don't? We never know, but what I do know is this. We would have wished we'd taken the time to be grateful for every step we took for granted prior to the moment life turned.

I recently visited the costume collection of Downton Abbey.

Thought it might be fun to test your fashion IQ.

Who wore them and in what season? 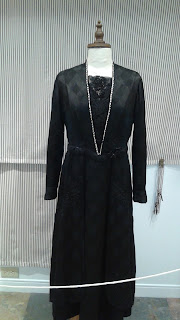 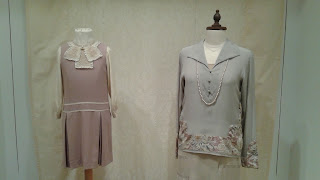 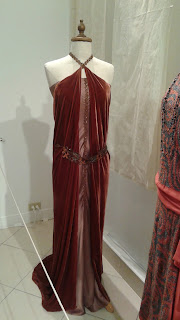 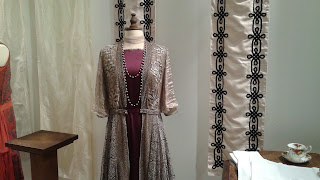 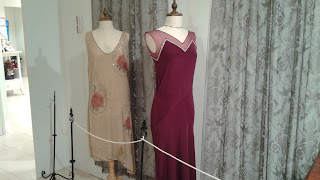 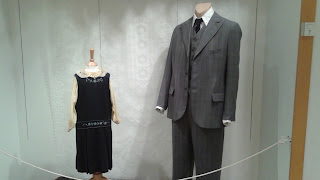 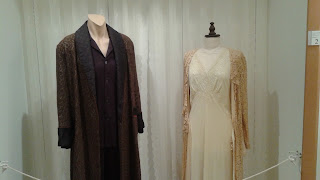 Was it Cora Crawley, Earl of Grantham, Tom Branson, Sybbie? Maybe it was Lady Mary or Lady Edith? How about the Dowager? Whomever it was, I sure do miss Downton, don't you?  I feel as if I've lost some dear friends. Julianne Fellowes sure knows how to write. SIGH.
Posted by Tea Time at 5:10 PM No comments: 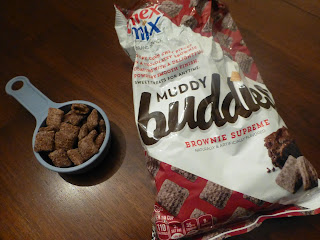 A friend brought these over a few nights back. Now I'm hooked! I hate her! (Not really-wink wink!) I've never had muddy buddies before. They would have to be brownie supreme to boot! UGH!

I predict the bag will gone by tomorrow evening. Maybe sooner!

Do you have a favorite snack?
Buyer beware: if you buy muddy buddies, take a 1/3 cup,  (that's the serving size) and then put the bag a long way from your reach. I'm telling you, your waistline will thank me.
Posted by Tea Time at 3:42 AM No comments: 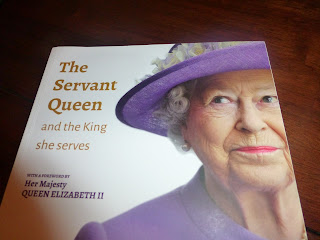 Today marks the 65th Anniversary of Queen Elizabeth II accession to the throne.

If you have been watching The Queen, you know her father, King George VI, died from lung cancer at the age of 56. He died on this day, February 6, in the year 1952.

Queen Elizabeth II is the first British Monarch to reach the Sapphire Jubilee.

Have you seen The Queen? Of course, I have!
There is one line in particular in the first series that I think really spells out the incredible weight passed on to the Queen.

She said, "You owe me an apology." Words spoken from her to the disgraced Edward VIII.

Because he made the choice to abdicate, Queen Elizabeth's father became king. (Another great movie to see if you haven't is The King's Speech.) Further, because King George VI died so early in his reign from lung cancer, Queen Elizabeth' life took a 180 turn. She was next in line to the throne, and became Queen Elizabeth II. What an extraordinary woman she is.

While in England last June, I was given the above book. A book filled with fascinating details about the Queen.

She never went to University, but has been adviser to 12 Prime Ministers.

She is committed to service.

She knows sorrow. It is said she will be contemplating the death of her father today.
Both her mother and sister died in the year 2002.

Queen Elizabeth II was called by God to do her duty. She has filled the role with integrity and much grace and courage. She is an exceptional woman.

Congratulations to Queen Elizabeth II and to the UK on this wonderful Sapphire Jubilee milestone.


It's Groundhog Day today. Will the rodent see its shadow and retreat back to sleep?

Will it be an early spring?
I've never been to Punxsutawney, Pennsylvania. Have you? I wonder what the festivities are like.

Have you ever watched the movie? Me neither! I tried one time but just couldn't stick with it!
Here's the trailer to refresh your memory.

I just celebrated my birthday on Tuesday. There's a day worth repeating! 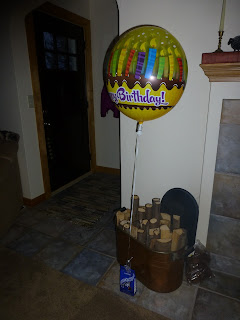 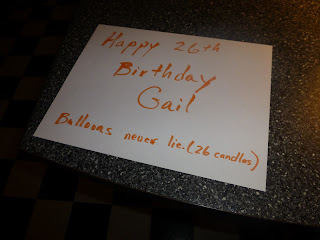 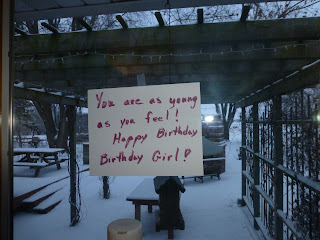 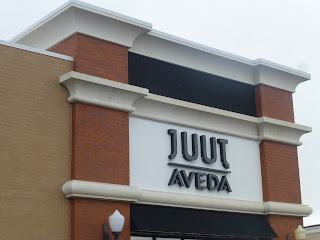 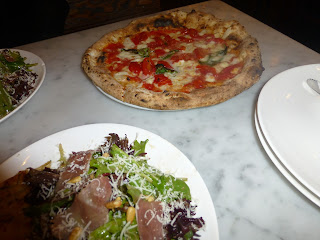 I woke to a balloon floating in my living room with a bag of chocolate attached! Signs greeted me throughout the house letting me know it's okay to be old! (I'm not 26. Don't I wish! 49 is the number!)
I spent some time at the Spa, then went out for lunch AND dinner. I went to the bookstore and browsed for hours! Really, I did! Yep. A good day to repeat.